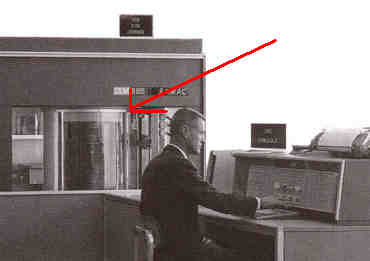 IBM introduced the 305 RAMAC computer in 1956, which was the first computer to include a disk drive named the IBM 350 Disk File. Prior to this magnetic computer storage had consisted of core memory, tape, and drums. The magnetic disk was seen as a replacement for the magnetic drum for the same reason 78 RPM Records eventually replaced Edison cylinders- more storage with less space.

The 350 Disk File consisted of a stack of fifty 24″ discs that can be seen to the left of the operator in the above picture. The capacity of the entire disk file was 5 million 7-bit characters, which works out to about 4.4 MB in modern parlance. This is about the same capacity as the first personal computer hard drives that appeared in the early 1980’s, but was an enormous capacity for 1956. IBM leased the 350 Disk File for a $35,000 annual fee.

Today the magnetic disc is the platform of choice for the temporary storage of digital video, but it wasn’t until the late 1960’s that the magnetic disc was used for any sort of video storage. At that time the Instant Replay Deck was introduced, which permitted the storage and playback of brief segments of analog video.