I recently ran into an issue, where my Java SQL and LDAP connectors stopped working after applying FP3 to Domino 9.0.1 / 64Bit.

Thanks to the help of the community, I was pointed to an already existing fix for this issue. IBM had released an JVM patch . I downloaded the patch and tried to install it by simply double-clicking the downloaded file.

On the machine ( a testing environment ), where I tried to install the patch, also the Notes Client is installed.

This obviously confuses the installer and so it tried to apply the patch to the Notes client instead of the Domino server. 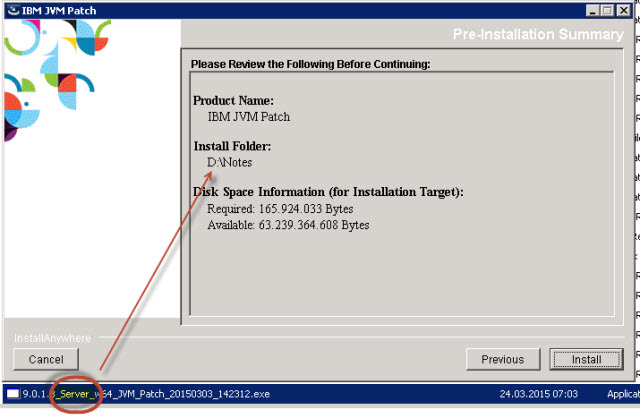 There is no way to change the install path in the GUI. I looked into the install log and found an interesting entry

So, I gave it a try and added the path to my Domino installation as parameters to the .exe file

Now the patch was successfully applied to the Domino server JVM …

I have not tried the 32Bit installation. Here the file states to be “ClientServer”. So, maybe, you can make a selection in the 32Bit version and the 64Bit version is simply missing this option.

If the command line is documented somewhere, blame me. If not, maybe this post can help saving some time.