Tomorrow, Tuesday 15 Jan 2019, IBM will formally announce the End of Marketing for all Watson Workspace offerings and we anticipate ending the Watson Workspace service on 2/28/19. This includes Watson Workspace Essentials, Plus, and the free offering. It is our intent to ensure that you have a clear understanding of your options regarding the closure of Watson Workspace.
While there is no question that Watson Workspace is innovative and agile, it hasn’t resonated with clients or obtained the traction in the marketplace necessary for IBM to continue forward with the service. Despite our best efforts and enthusiasm for these offerings, our decision to withdraw them aligns to IBM’s investment strategy, focused on delivering solutions that deliver measurable value to our customers and business partners.
IBM has stopped accepting new orders for Watson Workspace products, and we will not be adding any new features to the offerings. We have been working with our licensed customers and business partners to provide options for handling subscriptions and contracts once the end of service announcement is published to provide a smooth transition.
Starting tomorrow there will be a banner placed into the UI of Watson Workspace informing users of the timeline for moving off the service. Mobile customers may find details in the release notes of the mobile app. We will also provide access to a tool that will allow you to download and save your conversations and content from Watson Workspace. Please plan accordingly to capture any content you’d like to retain as we work to sunset the service. This option will only be available for a limited time.
Thank you for your support of Watson Workspace and IBM Collaboration Solutions. Please find additional details and answers to commonly asked questions in the FAQ that will be posted in the Watson Workspace banner tomorrow.

Why is it so hard to get a valuable answer from IBM support?

A few days ago, I talked about the “Disable Export View Data” feature which is available in Notes 8.0.2 and that there is a technote in which a IBM technote contributor wrote that

Playing around with the GetOption method of the NotesDatabase class, I finally found out, which value has to be used to enable / disable this new feature.

Thomas Bahn suggested to open a PMR to tell IBM that the option is not documented in the designer help. I did open a PMR on the same day …

Here is what I asked for:

ESR: Disable Export of ViewData is new to 8.0.2. Technote #1314694
says that “Enabling or disabling of this option can also be done using
an API call (setOption) or a LotusScript (SetOption). ”
Which OPTDB_ .. constant must be used? Not documented in designer help

Well, this is OK, so pls. look for hints and let me know, what you’ve found.

A couple of hours later, the next update

Next update on monday

… Unfortunately I can not answer
it this far  but I hope I will be able to do it shortly.

In the meantime, first level support escalated the PMR to BE.

Another 6 hours later, BE answered

… I did not understand what is being asked from us. Can you let me know what exactly is the question or what is the customer looking for.

I do not know, what the heck is going on. English is not my native language. But is it really so hard to understand a simple question?

Is there really a difference between the lines, I wrote as initial question in the PMR and the “translation”, firstlevel support sent to BE?

All information I have is in the PMR – I don’t speak customer’s native
language and had no other info than that already in the PMR.
My understanding of the problem is however that customer wanted to “use
API call (setOption) or a LotusScript (SetOption)”. In particular he
asks “which OPTDB_ .. constant must be used?” Because it is “Not
documented in designer help”.

And here is the latest update

… Confirmed that the requested information is not in designer help.

Ehm … I already know this, IBM!

What New Features In Notes 8 Require A Domino 8 Server Or Mail Template?

After upgrading a Domino® server to release 8.0x, you may notice that some Desktop Policy settings are unexpectedly being pushed out to the Notes® clients, despite not being configured to do so.

I found this in the Lotus Software KnowledgeBase today:

For more details, read document #1291598 in the Lotus Software KnowledgeBase

This NSF contains 22 ready-to-use utility components that you can use in your composite applications in Lotus Notes 8. …

The NSF is based on the Eclipse Update Site (8) template that is supplied with Lotus Notes 8 and can be copied to the local data folder of the Lotus Notes 8 client or on a Lotus Domino 8 server.

IBM published a set of two modules that train you on how to use LotusScript within a custom built application. Module 1 covers Domino Designer, LotusScript Debugger and the Designer Help file. Module 2 covers the creation of back-end LotusScript agents.

IBM published a new Quickr Demonstration. View it online or download the file to view offline. 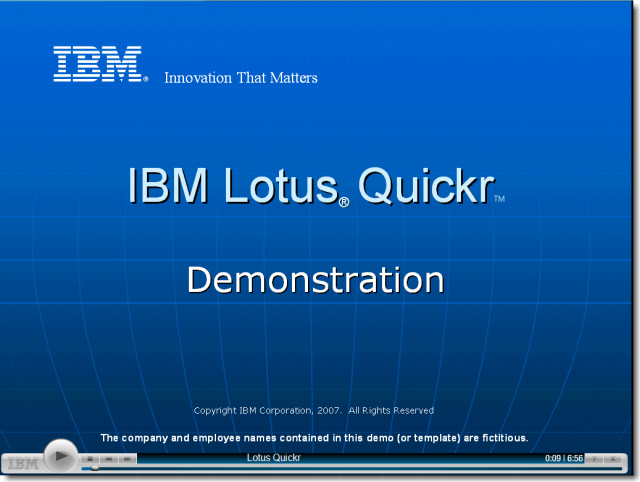